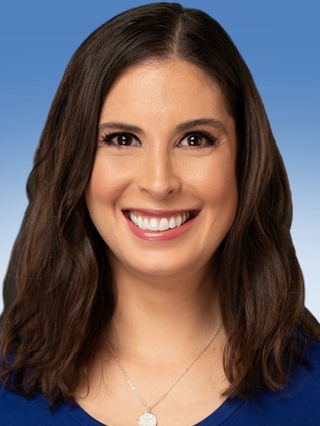 Meteorologist Rachael Kaye joined the StormWatch 7 team in January 2020, coming to D.C. from FOX6 News Milwaukee. Prior to that, she worked in Peoria, Illinois. She has covered everything from tornado warnings and damage to snow storms and major floods. After seven years away from home, she is happy to be back in the mid-Atlantic with friends and family. In fact, ABC7 provided a special homecoming; Rachael started her career in broadcasting as an intern with ABC7's very own Veronica Johnson.

Rachael received her Bachelor's degree from the University of Maryland - Go Terps! She then decided to pursue her Master's degree at Mississippi State University, where she also worked in the State Climatologist's Office. Rachael has partnered on published research articles, launched weather balloons for the National Weather Service, and chased tornadoes in the great plains. Her 2018 storm chase series at FOX6 News Milwaukee won an Emmy for the Chicago/Midwest region. Rachael also holds the National Weather Association Seal of Approval.

Outside of her love for forecasting, storm chasing and scientific storytelling, Rachael is a world traveler. She spent over a month volunteering in Nicaragua and Morocco, but her favorite destination has been as a tourist in southern Africa, where she went on safari with her sister. Rachael balances her adventurous side with yoga, writing, and time with her cat and dog. She also loves eating out and is open to restaurant recommendations in the D.C. area!