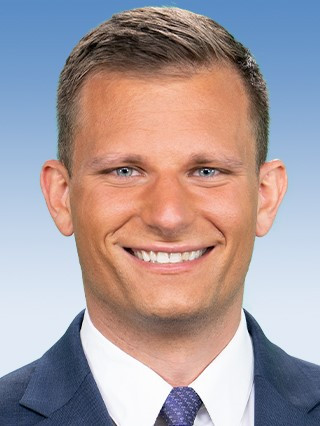 Nick and his wife Kathryn are both Michigan natives who happened to meet at a church gathering at Eastern Market in Capitol Hill. Nick moved to Alexandria, Virginia in 2018 and has also lived in the Mount Pleasant, Brookland, and Southwest neighborhoods in Washington, D.C. If you see him around town, feel free to say hi!

Nick joined 7News in 2021, after having worked at several news stations across the country earlier in his career.

He started his news career at WCCO in Minneapolis and later moved to Duluth to work as a reporter and anchor at KBJR and KDLH. As a reporter in the Upper Midwest, Nick covered news at the State Capitol in Minnesota, statewide political campaigns, and he did extensive winter weather reporting in Northern Minnesota and Northern Wisconsin. Nick also launched KBJR’s popular political “fact check” segment.

Nick’s first national story was of a Minnesota couple who exchanged vows while skydiving. The couple decided to get married one year after they were involved in a skydiving accident when their skydiving plane collided with another plane in midair. Miraculously, the skydivers survived the crash.

Nick also worked as a reporter for WCSC in Charleston, South Carolina where he covered the tragic mass shooting at Mother Emanuel AME Church and how the community came together and began to heal.

In 2016, Nick launched a State Capitol bureau in Lansing alongside several news stations in Michigan. As a political reporter, Nick filed daily stories for WWMT in Grand Rapids and Kalamazoo, WEYI and WSMH in Flint, and WPBN in Traverse City. On his first day on the job, Nick reported live for 7News at the Hillary Clinton and Bernie Sanders debate in Flint during the 2016 Democratic primary. Nick also made frequent trips to Washington, D.C. to cover the White House, executive branch, and Congress.

While in Michigan, Nick covered the Flint water crisis, the opioid epidemic, the criminal charges against former athletic doctor Larry Nassar, and the auto industry.

Having been born and raised in the Motor City, Nick has always been fascinated by transportation. That’s why Nick worked at the U.S. Department of Transportation from 2018 to 2021. In his role at DOT, Nick learned a significant amount about every mode of transportation, including aviation, rail, transit, maritime, trucking, pipelines, and the transportation of hazardous materials, and automobiles. Nick also witnessed the progression and development of new emerging transportation technologies, such as: commercial space travel, automated vehicles, drones, hyperloop, electric vehicles, and even aero-taxies.

Nick graduated from St. Cloud State University with a B.S. in Broadcast Journalism and a B.A. in Communications Studies. Nick received his A.A. from Fond du Lac Tribal and Community College in Cloquet, Minnesota. In his free time, Nick enjoys spending time with his family, volunteering at his church, and volunteering at a shelter that serves homeless men, women, children, seniors, and veterans.