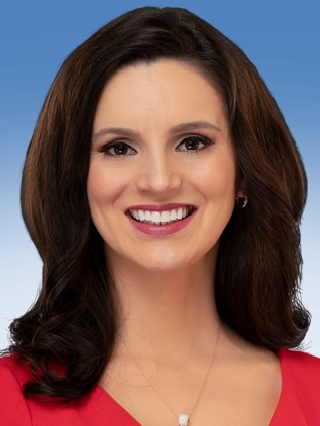 She is involved in the community through her volunteer work with several organizations, including the Autism Speaks National Capital Area, the Charles County Law Enforcement Torch Run to support the Special Olympics, and various school and career organizations. Lindsey is a Greek American, and is active with her church and the Greek community in Washington, D.C.

Lindsey has traveled across the country to cover the Pulse Nightclub shooting in Orlando, the Santa Barbara shooting, and hunt of the Boston Marathon bomber, the West Texas fertilizer plant explosion, and the movie theater shooting in Aurora, Colorado.

She’s covered the inaugurations of Presidents Trump and Obama from Washington, D.C., and President Obama’s re-election in 2012 from the swing state of Ohio.

Internationally, Lindsey created a documentary about child mortality in India through the International Reporting Project, taught TV journalism and social media to journalists in the Kurdish region of Iraq, and reported on medical tourism in Mexico.

Lindsey has also reported for the CBS-affiliate in Washington, D.C., Feature Story News service from the Los Angeles bureau, the NBC-affiliate in Tampa, Florida, and the ABC-affiliate in Southern Illinois.

Lindsey is a graduate of Southern Illinois University, Carbondale. Lindsey is a songwriter, collects vinyl records, and is learning Spanish.