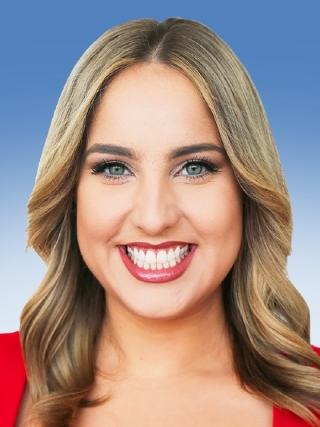 Kristen Powers joined the ABC7 team as a reporter in June 2019. You can catch her on Good Morning Washington during the week.

Before joining ABC7, Kristen worked as a reporter and anchor at KBAK/KBFX, the CBS and FOX affiliates in Bakersfield, Calif. Her job often involved wearing several hats, like shooting her own video and editing her own stories. She covered everything from breaking news, politics and local issues to feature stories and entertainment.

Kristen has reported from the scene of major stories across the nation, including the Las Vegas shooting in 2017 and several California wildfires. She was recognized by the Radio and Television News Association with a Golden Mike Award for her coverage in Las Vegas and journalistic integrity.

Before moving to California, Kristen spent a summer in D.C. working as a multi-media journalist, sending stories from Capitol Hill to a station in Little Rock and Fayetteville, Arkansas. In addition, she reported on the Pennsylvania and New Hampshire Presidential primaries in 2016.

Kristen grew up in Milwaukee, Wisconsin. She fell in love with storytelling while interning at several stations in the area. She loves that this job takes her to new places, allows her to learn something new every day, connect with amazing people and share their stories. Her favorite story to tell is one that leaves a lasting impact and inspires.

Kristen is excited to call the DMV home and to explore the area! On a day off, she loves participating in community events, spending time with family and friends, traveling, trying new food, attending sporting events, enjoying the arts and singing.