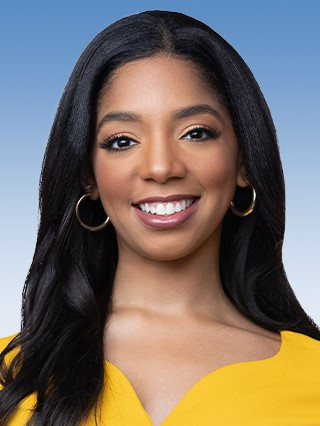 Britt Waters is a multimedia broadcaster with a decade of experience in the DMV area doing TV, radio and sports hosting. Britt joined the team September 2021 as a morning traffic reporter on 7News On Your Side and a lifestyle host on Good Morning Washington.

She obtained her BA in broadcast journalism from the University of Maryland where she was in the Mighty Sound of Maryland Marching Band. After graduation she got her big break entertaining millions on the nationally syndicated Russ Parr Morning Show, followed by being on air on WPGC in DC, WNEW in New York City and hosting on the DC Cable Television Network.

By night Britt Waters is currently the in-game host of the Washington Wizards. She previously hosted for the USAB 2021 Olympic team, and the WNBA- winning a championship ring with the Mystics.

When not on your TV or hosting in arenas, Britt hosts SiriusXM's Pandora Now Thumb 20 Countdown Show.

Britt has proudly converted her parents and older sister to Washington Wizards fans but will always embrace the Eagles as her football team.

In her free time, you can find Britt breaking down pro-wrestling for her vast following on TikTok, enjoying her daily Starbucks drink, collecting sneakers, or eating pasta at Filomena in Georgetown. Keep up with Britt at @itsBrittWaters.