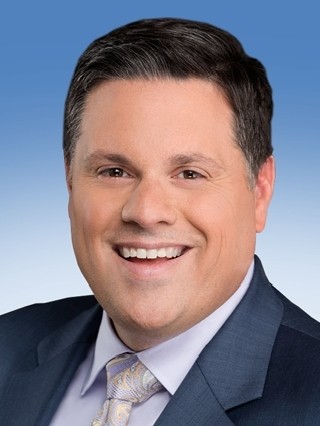 Meteorologist Brian van de Graaff, a member of the StormWatch7 Team for over 2 decades, carries the American Meteorological Society's prestigious Seal of Approval. You can catch him weekend nights on 7News ON YOUR SIDE!

Prior to his current role, he forecasted the weekday morning and midday weather, with his first assignment ABC7's Good Morning Washington. Brian's on-air career path took him from Salisbury, Maryland to Richmond, Virginia to New York City and back home to Washington, D.C.

Brian was born in Arlington, but grew up in the rural Virginia communities of Culpeper and Madison. His love for the weather was apparent from an early age, so it was no surprise after graduating George Mason University he jumped right into the business shadowing his mentor, Doug Hill.

"It was not only my studies, but my one-on-one attention from Doug that helped me hone my forecasting skills," says Brian.

As a meteorologist, one of Brian's most exciting memories is of the time he spent in New Orleans only days before Katrina hit. The expression "the calm before the storm" could not have resonated more than during that time- it was eerily quiet with a very slight breeze, the skies were bright blue and the long-time NOLA residents were relatively un-phased by the weather reports. With hotel staff proclaiming that "it is always so much fun when the storms come" and "we will take good care of you," one family member was considering "waiting out the storm." Brian's response that "it really wouldn't look good for me to leave a family member in the path of a major hurricane" convinced everyone that it was time to "get out of Dodge!"

These days it is not uncommon to see Brian crisscrossing the region in the StormTrak7, the station's mobile weather vehicle. The brightly painted vehicle is outfitted with top quality weather instruments, which are excellent tools to teach kids about weather and weather safety.

Becoming an Eagle Scout as a young adult remains a source of pride for Brian. He tries to stay true to their ideals and use some of the skills that he learned from the organization. He has hiked and backpacked throughout the U.S, from points along the Appalachian Trail in the East to the Grand Canyon in the West and places in between. Travel is also a favorite hobby of Brian's as he has ventured across the U.S. and the globe, his farthest journey thus far being to Australia. Now he strives to earn the most points and miles to travel with his family of four.

Brian, his wife Kristen and their two children live in Fairfax, Virginia.