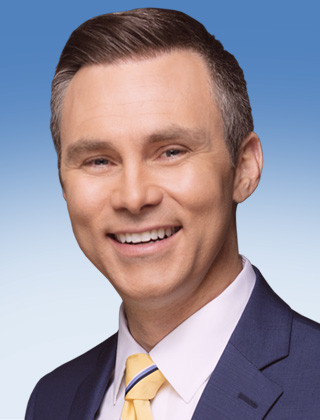 Kelly is recognized nationally for his popular "Weather on the Go" segments where he has been known to turn an entire golf course green into his weather “green screen,” scale up into his forecast map shown on a giant green climbing wall, and even paddle in front of a makeshift weather wall in a kayak! He has also won multiple awards for creating an innovative, at-home setup, in which he has a fully functioning studio with chromakey wall, as well as outdoor live areas which utilize augmented reality graphics.

Prior to joining WJLA, Kelly served as the Chief Meteorologist at stations in Columbus, OH, Phoenix, AZ and Spokane, WA. He has also worked at TV stations in Sacramento, CA, Cincinnati, OH, Medford, OR, and Eureka, CA. He graduated from California State University, Sacramento with a degree in Broadcast News Communications, completed the respected two-year Broadcast Meteorology program at Mississippi State University and has been an active, certified member with the National Weather Association for nearly 20 years.

Kelly has been kindly recognized for his work, honored with 11 Emmy awards, including the Emmy win for Best Weather Anchor right here in the National Capital/Chesapeake Bay region two years in a row, five AP awards for Best Weather Anchor, a regional Edward R. Murrow award for technological innovation, and voted Best Weathercaster in both Columbus Monthly and Phoenix Magazine.

Kelly has made guest appearances 12 times on ABC’s Good Morning America and four times on the network’s World News Tonight. Bill has been married to his wife, Jolene, for 19 years and together they have three daughters, including twins.