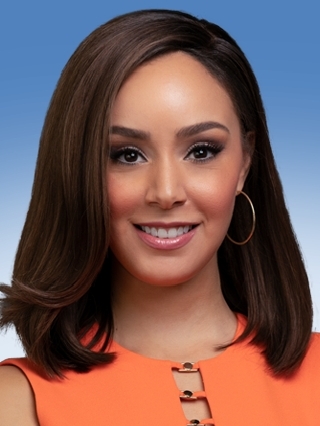 Ashlie Rodriguez is an award-winning journalist who serves as a morning anchor and reporter at WJLA-TV and WJLA 24/7.

Ashlie recently served as an anchor/reporter in San Diego, CA at KUSI News. There she anchored and reported on significant events such as President Donald Trump’s visit to the U.S.-Mexico border wall, the deadly outbreak of Hepatitis A, the homeless and housing crisis, and the San Diego Chargers leaving for Los Angeles after 65 years of being the city’s NFL team.

In El Paso, Texas at ABC 7 KVIA Ashlie was recognized by the Associated Press for her investigative beat reporting on the school districts, which at the time were plagued by corruption during the “No Child Left Behind” cheating scandal. After the superintendent of El Paso Independent School District was sent to federal prison for his role in the scandal, Ashlie was tasked with keeping a watchful eye over how the area’ superintendents and school boards were spending the hundreds of millions of dollars taxpayers and parents had entrusted them with.

Ashlie’s passion for investigative journalism began while working as a print reporter at the National Journal Magazine in Washington DC, San Diego Union-Tribune and the Los Angeles Times. She first transitioned to an on-air multimedia journalist at KFBB-TV in Great Falls, MT.

A San Diego native, Ashlie graduated from San Diego State University with a double major in Political Science and Journalism. She enjoys exercising, reading, shopping and exploring new restaurants. Ashlie’s guilty pleasures are wine and cheese, watching The Office, Lord of the Rings, or Bravo’s Real Housewives, discussing all things politics and loving on her fur babies.